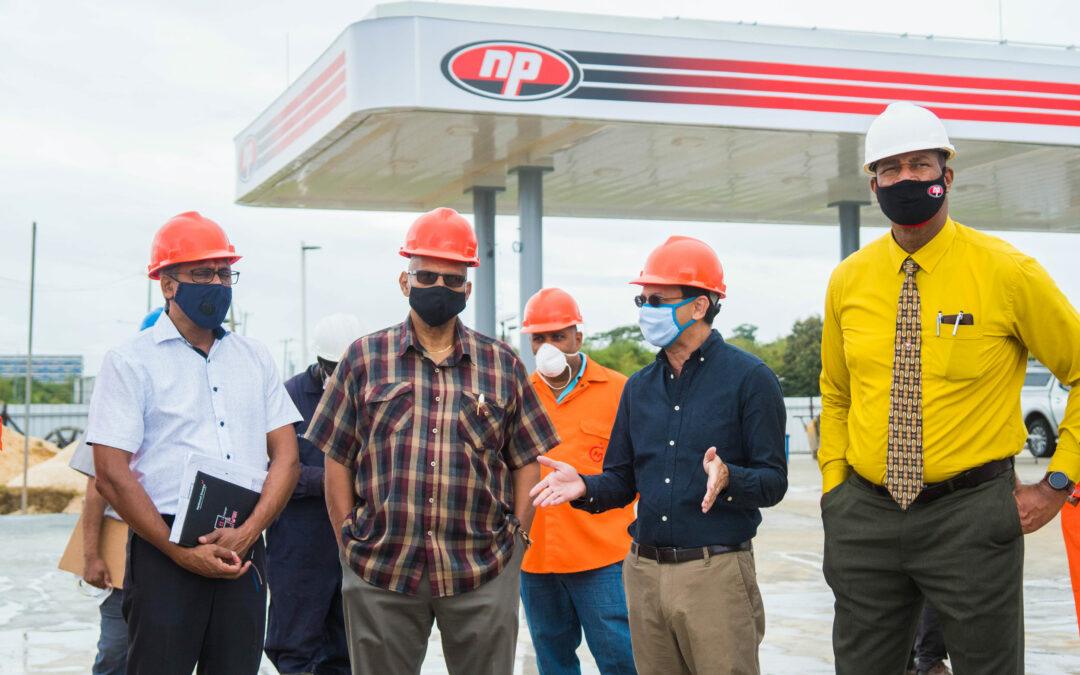 Point Lisas – The service station of the future powered by renewable energy is coming to Trinidad and Tobago. NGC CNG Company and the National Petroleum Marketing Company are completing the construction of a state-of-the-art solar powered service station in Preysal, Couva which will be opened in 2021. Construction work, which started in January 2020, is expected to be finished by the end of March 2021, with a targeted opening date thereafter. This station will dispense the traditional liquid fuels, Super, Premium and Diesel, as well as the more environmentally friendly and cost effective CNG and electric vehicle charging.

As part of its design, 320 solar photo voltaic panels which has the potential to generate at least 100kW of power are being installed on the topside canopy of the station. The renewable electricity generated from the panels will power several aspects of the operation of the station, including the lighting, liquid fuel dispensing and electric vehicle charger. The station, located at the Preysal exit of the Sir Solomon Hochoy Highway, will have 20 filling spots, 10 for CNG and 10 for liquid fuel, as well as 2 spots for electric vehicle charging.

Recently NGC Chairman Mr Conrad Enill toured the construction site along with NGC CNG President Curtis Mohammed; National Energy President Dr Vernon Paltoo and CEO Ag. of NPMC Mr Claude Job to look at the work in progress. Chairman Enill remarked that he was impressed with the facility and the fact it will be offering traditional fossil fuels, the cleaner alternative CNG and renewable energy to charge electric vehicles, thereby catering to all forms of power required for land transport. Most of the construction work is completed with the solar panel installation expected to be finished in March.

When the station was conceptualized by the NGC Group a few years ago, a decision was taken to further the group’s foray into our green agenda by utilizing solar power extensively in operation of the station. National Energy’s Sustainable Energy Division is managing the installation of the solar panels and tie-in to the power requirements of the facility.

NGC and its subsidiary companies are pursuing various low carbon, green, energy efficient and sustainable energy initiatives through strategic partnerships and by operational optimization.
NGC and National Energy earlier this month signed an MOU with Kenesjay Green and NewGen to work collaboratively on the creation of a sustainable hydrogen economy for the energy sector of Trinidad and Tobago. In January 2021, NGC signed an agreement with Orbital Eye B.V. to conduct research, via satellite data, and monitor greenhouse gas (GHG) and methane (CH4) emissions, both locally and regionally. In December 2020, NGC Group and UTT also signed an MOU to commence work on a Climate Change Mitigation Project, which will help Trinidad and Tobago realise its Cop 21 Paris Agreement commitments.

While a final opening date for the station has not yet been announced, the facility promises to be world class and positions the NGC Group of Companies and its stakeholders as architects of a sustainable energy future.